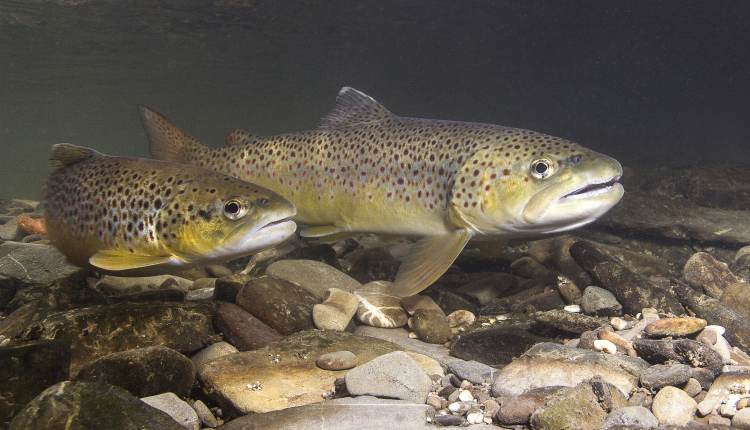 Brown trout is a species of trout that is originally native to Europe, however the brown trout has been stocked and planted in various lakes and rivers throughout the United States. Brown trout like Rainbow trout can live their entire lives in freshwater, or they can venture out into the ocean for years at a time. Brown trout that have lived in the ocean are commonly known as sea trout. 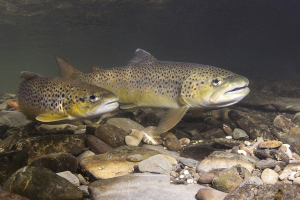 Brown trout often suffer from overfishing, mostly due to the fact that too few anglers seem able to identify and return mature females into the lake or stream, thus ending that fishes spawning cycle. A single mature female brown trout can lay thousands of eggs, creating a far more sustainable sport.

Brown trout are active both day and night, and can be caught at nearly any time.

Brown trout, in fresh water, feed primarily on invertebrates, small fish, mice, frogs, and other small flying insects on or near the waters surface. For more information on how to fish this way, check out Fishing for Trout with Floating Worms. This focus on flying insects as a primary source of food, coupled with the fact that the brown trout is an opportunistic feeder contribute greatly to the brown trout being a favorite target of fly fishermen.

Brown trout, while being a favored target for fly fishermen, are also likely to strike at many other baits and lures. As with many other trout brown trout can be caught with spinners, spoons, plastic worms (floating or not), jigs, plugs, crank baits, however due to the high reliance that brown trout have to insects in their diet they are more frequently caught using worms or fly fishing as bait.